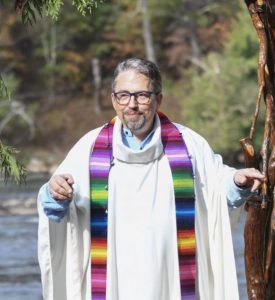 Here is what Jay has to say about his role as Minister of Ritual, Teaching & Counseling:  "There's a lot of words in the title, and wordiness is something I try to avoid in ritual. Ritual does not need to be filled with activity...it needs space for listening. I find that listening and reflecting back is essential in any aspect of ministry. As a Qualified Mental Health Professional with most of my career focused in trauma and crisis, and a Board Certified Addictions Counselor, I've been most informed by working 'in the trenches' of the Holy. As a child, I had an insatiable curiosity to learn about belief systems, perhaps to fuel my imagination. That's where creation comes in. If we're making it up as we go along, perhaps the Divine is as well. That's what excites me about Jubilee!. We've been making it up as we go along, just like the Universe. As above, so below, after all." A full-blooded Cherokee Wisdom Keeper and Ceremonialist, Yona is a member of the Eastern Band of Cherokees. He was born and raised on the Qualla Indian Boundary in the Great Smoky Mountains in Cherokee, NC.  He is the great, great grandson of YonaGuska, Cherokee chief during the Trail of Tears (1824-1839).  Yona, who is fluent in the Cherokee language, grew up learning the songs and stories of his people. To keep these traditions alive, he is honored to bridge the ancient past to the ancient future, which is in constant need of support.  Yona shares the meaning of traditional ceremonies as a way of life as it was shared with him by his Grandfather. He is a spiritual advisor, and offers pastoral care, weddings, birthing ceremonies, Native American sweat lodge, memorials, funerals, land/home blessings, motivational speaking, team building and climate justice awareness.  Yona invites Ancestral Presence to Jubilee!’s Sunday Celebrations by calling in the Sacred Directions. Howard Hanger, Founder & Minister Emeritus
A graduate of the Candler School of Theology at Emory University, Howard relocated from Detroit to Asheville and joined the staff of Central United Methodist Church in Asheville, where he formed a nondenominational worship service that he called “experimental ministry."  This is where he planted the first seeds for what was to become Jubilee! Community in 1984. Attendance grew rapidly, prompting Howard to leave the Methodist church and form the independent Jubilee! Community in 1989.  He also founded the Hanger Hall for Girls middle school in Asheville. Howard retired in August 2019, but officiates (by request) at baptisms, marriages and other ceremonies – and is often seen (in plainclothes) at Jubilee! celebrations.  Howard once formed a band that toured nationally.  He has a thing for bananas. 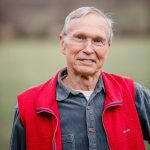 As administrator, Bruce is responsible for Jubilee!'s financial management, overseeing the building's upkeep and usage, supervising staff, organizing office volunteers, and at least a hundred other things. Stepping off the Jubilee! Board to take this staff position, Bruce has been deeply involved with Jubilee! since 1998.  He and his wife Shonnie were married by Howard Hanger in 1999, and their daughter Gracelyn was baptized at Jubilee! in 2011.  Bruce's skill set includes problem solving, planning, organizing and communications. He was an Obama field staff member during the 2008 presidential election and managed several other progressive political campaigns over the past decade. His writing has been published at the Washington Post, Huffington Post, SelfGrowth.com, The Good Men Project, and the Asheville Citizen-Times, where he was an editorial columnist during the early 2000s. You can read his full resume here, and find out more than you ever wanted to know about him on Bruce's website.  Asked why at age 78 he's willing to become the Jubilee! administrator during this challenging time, he explained that at the conclusion of his daily morning meditations, he calls out to the Universe: "I am your instrument. I am ready. Show me the way." Taking on this role at Jubilee! was the message he received in return. 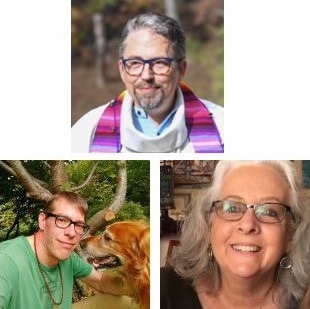 In response to the insights and creativity generated through the hiring process for the Sunday Coordinator role, plus the desire that emerged in Community Conversations for collaborative leadership, the HR Team recognized the need to think outside the box for selecting liturgical leadership for our Sunday celebrations. So instead of just one Sunday Coordinator, we have a team of familiar and well-loved Jubilants:  Jay Joslin, Susie Davis and John David Short. Together they vision, create and lead Jubilee!'s Sunday Celebrations. 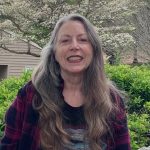 When Michele Bernhardt moved to Asheville from San Francisco in 2018, she expected to continue her work as a Healing Touch practioner and Reiki master, but it turned out the mountains already had plenty of energy healers. So she decided to return to her previous career...communications...with the caveat that her new job would make her heart sing and serve the community.  Which is exactly what she has found as Jubilee!’s communications director.  Now she is using her 30+ years of public relations and marketing communications experience to spread Jubilee!’s joy filled message through its website, newsletter, social media and more.  Learn more

Teri suspected that choral singing was in her future when, as a child, she used the vacuum cleaner as a drone while vacuuming and made some very fun and interesting harmonies.  She has been involved in many different kind of vocal ensembles, including doo wop, barbershop, a classic rock band, and the select group of the Juilliard Choral Union.  She was the Music Director of the Holston Valley UU Church in Johnson City, TN before her move to Asheville, and is also currently the Music Director of the Asheville Threshold Choir. Teri loves to put together music that supports people's spiritual growth, and is glad to be part of the Jubilee! Community where music is valued so highly. 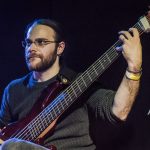 Ryan Crabtree has been playing bass with the World Beat Band for a short while, and now he takes on a new role: Interim Band Leader. And he is well suited to the job. Raised by musicians, Ryan began playing in his middle school band at the age of ten as a clarinetist. After switching to bass in high school, he began exploring other musical genres and soon fell in love with the instrument. Having found his passion, Ryan started working as a professional musician  in his hometown of Chattanooga, TN by the time he was eighteen. He went on to earn his Bachelor of Music, specializing in Music Education from the University of Tennessee at Chattanooga and continued working as a full-time musician post-graduation until moving to North Carolina with his wife Kelsey in December 2016. Since settling into the Asheville music scene, Ryan has performed with a multitude of artists all across venues and festivals in the southeast region. In his spare time, he continues to write, record, produce and teach his son Jasper to play guitar.  You can read more about Ryan here and check out some of his music here. Cathryn the Grateful, Minister of Movement

Based in Charleston, SC, Cathryn leads guided movement and dance as a living embodiment of prayer.  She is co-founder of The Joyful Revolution, an effort to highlight people, planet and pleasure with singing, dancing, parading and connecting for justice.  Cathryn serves as a celebrant for weddings, funerals and sacred rituals. www.cathrynthegrateful.com From 2008 until COVID-19 safety precautions temporarily closed the Nurture Program for Youth, Vicki served as the Nurture Coordinator and Curriculum Specialist at Jubilee! With a strong background in childhood development and education, she received her undergraduate degree in Psychology from Brown University and Ph.D. from the University of Alabama.  She previously taught a variety of courses  at Warren Wilson College, where she served as chair of the Psychology Department.  Vicki is also the author of "We All Have Sacred Spaces," a children's book exploring the sacred sites from seven of the world's major faith traditions. After decades spent in social work, applied social research, video production and political activism, Daniel returned to music and soon found himself bringing a wide array of music into Jubilee! celebrations in 2001.  In addition to accompanying services with the incredible Howard Hanger for 19 years, he facilitated numerous Cosmic Mass rituals and extended Vision Quest encampments.  For over 10 years he led an events band and did improv music and acting for Asheville Playback Theatre.  In 2015, he created I Am Sound LLC to help people who feel stuck and out of tune to inhabit their authentic, creative selves on piano and elsewhere in their lives in the midst of reality.  He loves witnessing when somebody else “gets” that they’re naturally musical too.  Daniel retired as Jubilee!'s band leader in 2021. Jackie is a holistic health educator, wise woman practitioner, yoga therapist and author. She has mentored with some of the world's preeminent teachers, scholars and visionaries in mystical traditions, weaving together wisdom from around the world. She has taught regionally at universities, hospitals, studios, businesses, national conferences and festivals, passing on tools that empower individuals in their own health, transformation and evolution. She is also a teacher and writer for Yoga International. Jackie left her staff position at Jubilee! in 2021 to work for Ram Dass' Love, Serve, Remember Foundation. Candace is a leader of celebration and ritual, songwriter and author of Bulletproof Faith: A Spiritual Survival Guide for Gay and Lesbian Christians (2008, Jossey-Bass).  A graduate of the Candler School of Theology at Emory University in Atlanta, GA, she leads workshops on writing, spirituality and metaphysical topics such as A Course in Miracles.  She is active in the fight for LGBTQ rights and other progressive causes. A former journalist with over 30 years experience, including a six-year stint at CNN, Candace is the founder and editor emeritus of Whosoever: An Online Magazine for LGBT Christians, which began in 1996 and is back online with new leadership and vision. She enjoys time with her dogs, Pax and The Lord (a German Shepherd, so yes...“The Lord is my shepherd”) and her three cats, George, Salix and Rumi. Chris is leader of the Jubilee! Pioneers, the Jubilee! community in Baton Rouge, Louisiana. A community activitist, he is executive director of Rebuilding Together Baton Rouge (RTBR), a non-profit with the mission of helping elderly homeowners remain in their homes and age in place. RTBR addresses safety, access, and efficiency issues that impact the quality of life of the homeowner.

Justin is an an ordained Jubilee! minister and an ordained Unitarian Universalist minister, who is currently keeping the main thing, the main thing at Caldwell Presbyterian Church in Charlotte, NC. He was a student at Wesley Theological Seminary and studied  World Religion at Warren Wilson College.  He has an amazing wife who is busily saving the world as an environmental attorney, and three rambunctious children. 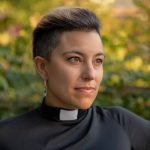 Alba is a Queer Evangelical Femme who lives and loves in la Lucha with QTPOC folks as a Spiritual Healer and Bruja Troublemaker to combat spiritual terrorism, reclaim the Divine, and eradicate shame and fear wherever they are found.  The Spiritual Strategist for Soulforce and a Co-founder of the Sexual Liberation Collective, Reverend Sex works with individuals and small groups to decode white Christian Supremacy, heal internalized religious-based trauma, rebuild our ethics, and reclaim our sacred desires and spiritual practices. With a strong belief in “One God, Many Paths," Barbara has been on a spiritual growth path for the past 25 years, and has studied Christianity, Buddhism, Sukyo Mahikari, Metaphysics, Creation Spirituality, what she likes to call “Jesusism” (separate from religious dogma), meditation and symbolism.  Ordained as an Interfaith Minister, Barbara is a Celebrant Leader, Transformational Coach, Certified Grief Recovery Specialist, writer, painter, Jubilant, and much more.