Original Sin or Original Blessing? Discover the Difference with Jubilee!

According to ex-Dominican priest, Matthew Fox, nowhere in the bible does it say that you were born in sin. To him, original sin does not exist. In fact, the bible says the exact opposite. It says “And God looked upon all he had created and called it very good.”  So if that is the case, then none of us were born in original sin! instead, we were born in what Fox calls “original blessing”.

Original sin was not the teaching of the radical rabbi Jesus.  It was popularized by Augustine, and according to the doctrine, humans are born with a sinful nature, descended from Adam, and will be prone to sin. Over the years, original sin has become a mainstay in Christian dogma, used to shame and control people. 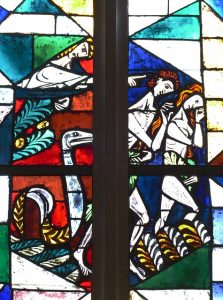 These are the questions we ask at Jubilee!  We don’t care what you believe, but we do care how you live. At Jubilee! we follow the practice of Creation Spirituality and original blessings, but also know that all paths lead to the holy.  Rather than emphasize limiting dogma, we see value in mysticism, spirituality, and mystery. To this end, we practice the Four Vias. These paths, conceptualized by Creation Spirituality, are celebrated on the arrival of each season. For us, the Four Vias are representations of the myriad of experiences that make up human life and enrich our spirituality.

If the concept of original blessing is more appealing to you than original sin, Jubilee! may be the faith community for you.  We welcome all to our Sunday Celebrations, where we gather on Zoom, Youtube, and Facebook. Using music, creativity, and mindfulness, our community brings people together under a common understanding through faith and togetherness. Come join one of our Sunday Celebrations online!